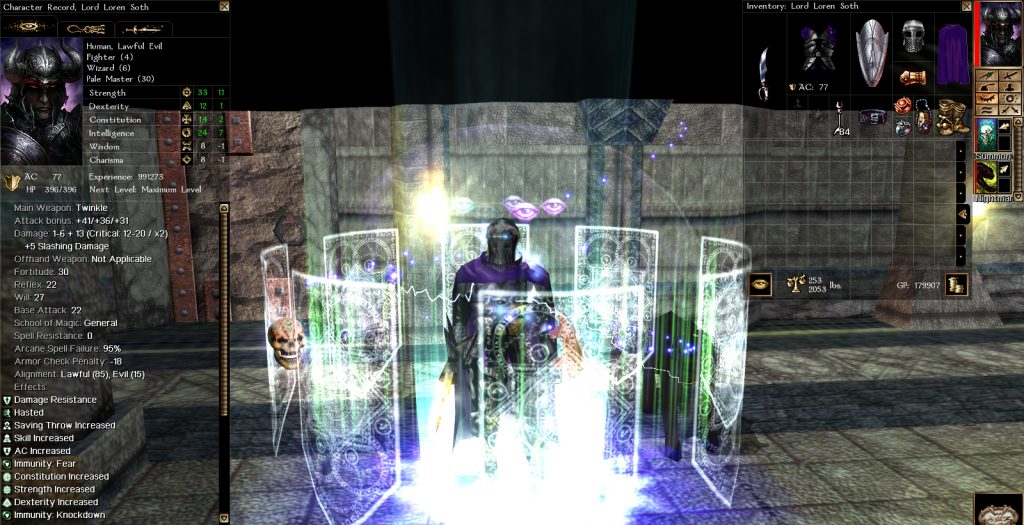 Mindless zombies are scary. Brilliant wizards are scary. Heavily armoured warriors are scary. Combine all three together? That’s the making of nightmares. The Undead Lord is a nightmare personified.

Summons: The Undead Lord’s study of the necromantic arts has given him mastery over the undead, and as such, he can summon forth a demilich to fight at his side once per day. The lesser demilich is immune to spells level 3 and lower, giving him an edge against casters. The Undead Lord can also summon a skeleton warrior from the dead to fight with him. Finally, a panther accompanies the Undead Lord serving as a distraction with sneak attacks.

Devastating Critical: Thanks to his combat feats and access to the “keen edge” spell, the Undead Lord scores critical hits on a 12-20, or 45%, of the time. With three normal attacks per round and one extra from haste, the Undead Lord can take down ancient dragons, or anyone else not immune to critical hits, in one blow.

True Strike: With this spell, the Undead Lord gains a +20 attack bonus, though its effects are short-lived. True Strike should be saved for monsters that are harder to hit.

Spell Casting: Perhaps the true offensive power of the Undead Lord comes from access to all the wizard/sorcerer spells. The Undead Lord should focus on those spells that have no save, such as the Bigby’s line of spells, to disable opponents. Power Word Kill and Power Word Stun are great to take down wounded enemies. You might also wish to cast an occasional Greater Ruin or empowered Isaac’s Greater Missile Storm. This character has it all.

Spells the Undead Lord should seek out are:

Armour Class: The Undead Lord has quite an impressive naked AC of 31! Thanks to his training as a fighter and the Automatic Still Spell feats, the Undead Lord can wear mundane full plate mail and a tower shield with no chance of disrupting his arcane spell casting. This brings the Undead Lord’s AC to an impressive 42. The Undead Lord is extremely difficult to hit and the extra AC is handy against mobs of monsters. Good, Neutral, and Evil creatures alike will know the difficulty of hitting the Undead Lord whose AC will be a whopping 68 AC minimum after buffing with spells such as Haste, Mage Armor, Cat’s Grace, and Epic Spell: Epic Mage Armor.

Concealment: Combining the high armour with class with concealment obtained through Improved Invisibility and Bigby’s Interposing Hand (no save), the Undead Lord is very difficult to hit.

The Undead Lord In CombatImmunity to Critical Hits: The Undead Lord invokes fear and awe in others because of his natural ability to resist critical strikes. He also gains benefits from his palemaster heritage, including immunity to hold, paralyzation, and stun. Watch and laugh as the pathetic weapon masters and rogues realise their folly when their main forms of attack are rendered useless against the Undead Lord.

Elemental Damage Reduction: With access to all the wizard spells through learning from scrolls, the Undead Lord can reduce elemental damage with spells such as Energy Buffer, Protection from Elements, Resist Elements, and Endure Elements.

Physical Damage Reduction: The Undead Lord has an astounding damage reduction of 50/+20 from epic warding. The above-average enemy, unable to score critical hits, will be hard pressed to overcome the Undead Lord’s reduction before he is destroyed.

Magical Item Preferences: With access to magical equipment, the Undead Lord becomes a foe that all dread to face. He should focus on items that increase intelligence for extra spell slots and strength for extra attack bonus and damage.
Character Advancement History

Following is the path of the Undead Lord during the first forty levels of his life.