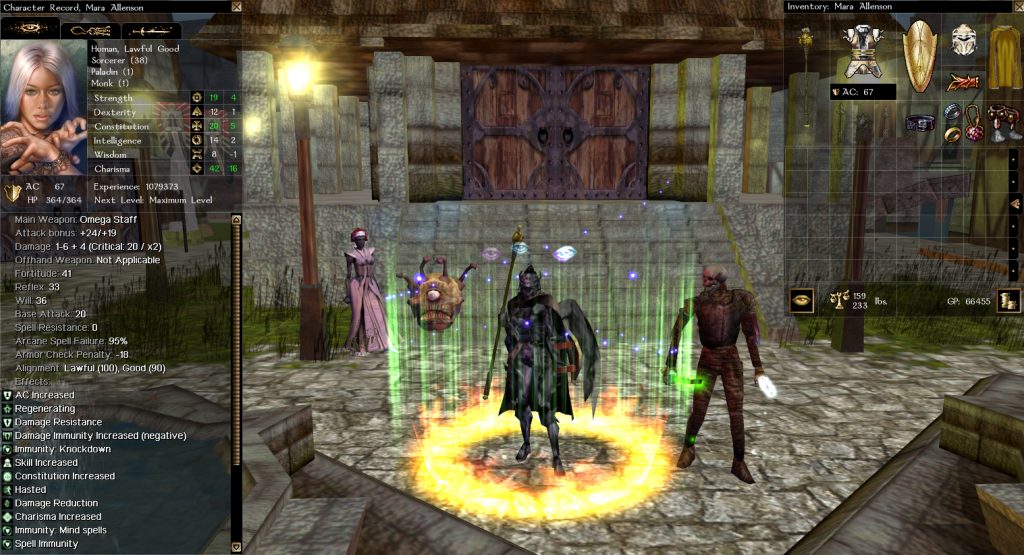 “Mistress, they are coming! The Shroud leads his armies to your gate!”

The Exalted Sorceress Unleashing Her MagicShe turned from the pale bones that lay across her cluttered desk, annoyed by the interruption. She was so close! She had been deep in study for the better part of a week and had refused her head-of-staff entry into her sanctum despite his increasingly desperate wailing at the huge, oaken door. He had taken it upon himself to hire three rather large men to bash the door down as a final measure to gain her attention. She noticed he was still talking to her.

“…demands your surrender to his unholy hordes!”

“Really?” Her eyebrows arched to show some mild interest in recent developments. “Well then, I guess we had better speak to this…Shroud…you said? Yes, good idea. Go and bring him would you?”

“He is HERE Mistress!”

“Ah well, very good then, show him in.” Just then, a giant of a man clad in smoldering black armor covered in cruel designs, strode into the room. Power glided in a wave before him. “You must be the reason for the delay in my studies.”

“I AM SHROUD, DESTROYER…” She waved her hand in his direction. He became a tiny black dog that yapped.

“Ohh…very cute. Now, no more interruptions Cecil, or I will get very cross with you.” She turned and resumed her study of the bones. “Find good homes for them would you?” She waved her hand in the direction of the window.

He made to reply but was drowned out by the vast army of howling dogs that inexplicably now lay stretched across the sprawling fields surrounding his lady’s keep.

The Exalted Sorceress is the embodiment of an epic spell caster. Not to be trifled with, she has focused her studies on the art of necromancy and specializes in death-like spells. She dislikes little dogs too.

Spell casters have always ruled the world and the Exalted Sorceress perhaps rules the spell casters. She is the Queen Bee of the hive. The Exalted Sorceress has a very nice caster level of 38, letting her do full damage on almost all her spells. She can throw around Flame Arrows, Missile Storms, Ice Storms, or even Acid Arrows, doing tons of damage, but she really shines with necromancy spells, such as Wail of the Banshee, Horrid Wilting, and Negative Energy Burst. She also can call upon the Bigby line of spells to help disable her opponents with things like Bigby’s Crushing Hand, Bigby’s Forceful Hand, or Bigby’s Grasping Hand.

The Versatile Kensai In CombatIf you are looking for a character that is easy to play all the way throughout the build, then this might be your ticket. The Exalted Sorceress has one level of monk to help her maximize such skills as discipline and tumble, but, more importantly, she gains feats like Evasion. Evasion will allow her to take no damage from spells that allow a reflex save if she succeeds at her saving throw. With a base reflex score of 27 (naked) and her spellcraft bonus of +8, the Exalted Sorceress can reliably Evade most reflex saving throw spells. This is a very nice boost to her defense and allows her to not fear many Evocation spells that other wizards or sorcerers use.

The Exalted Sorceress was built for Player vs. Player combat. She focused her training in casting spells while wearing Full Plate Armor. She is able to cast spells in armor without fear of spell failure and she is hard to knock down because she took Epic Skill Focus: Discipline. Only the most determined (and lucky) of opponents should be able to knock her down in battle.

In a group, the Exalted Sorceress can stay in the back, raining death and destruction upon the enemy, while the lesser beings hack and slash the monsters up close. She also has the ability to spontaneously cast whatever spell is needed and is not bound by preparing her spells in advance like wizards do. This added bit of flexibility makes the Exalted Sorceress very tough.

Against annoying melee opponents, the Exalted Sorceress has several defenses:

Thanks to her Automatic Still Spell feats she can wear Full Plate Armor and use a Tower Shield
She can enter Improved Expertise Mode and gain an additional 10 AC
The Exalted Sorceress can cast Epic Mage Armor and raise her AC by 20 points
She can reduce her opponents’ damage by 50/+20 with Epic Warding
Her opponents will miss half of the time because of Improved Invisibility
The Exalted Sorceress’ AC when fully buffed and without magical items, is a whopping 65

Combined, these factors make her very hard to hit!

But who needs defense when perhaps the easiest way to kill those Devastating Critical hitters is to disable them? Her best defense may just be her offense. The Exalted Sorceress can knock her opponents down (Bigby’s Forceful Hand), grapple them (Bigby’s Grasping Hand), or for those opponents who have immunity to knockdown and have Freedom of Movement, the Exalted Sorceress can stop them dead in their tracks with Bigby’s Crushing Hand. The “cut-scene” effect of Crushing Hand will disable just about anybody. A disabled opponent is easy pickings for the Exalted Sorceress who can easily finish them off with her offensive spells.

Following is the path of the Exalted Sorceress during the first forty levels of her life.